Mermaid is a markdown based diagramming tool. It is a javascript library that can be used to generate diagrams from text, similar to Markdown.

I’ve been a maintainer of the mermaid project for a while now. Mostly focused on the live editor, mermaid.live .

Let’s see how far we can shrink mermaid from its current 2.05 MiB size.

Types of bundles in Mermaid

This is usually imported directly by static sites via a script tag, and contains all dependencies required to render mermaid diagrams inside it. This is the largest bundle, with 0 external dependencies.

mermaid.esm.mjs is the ESM version of mermaid, which is the recommended version to use in modern browsers.

This contains only the core mermaid code and is supposed to be used with bundlers like Vite/Webpack/etc when including mermaid as a dependency in another project. There is no minified build as it is expected that the bundler will minify the code.

Now we need to know what each bundle contains and how they are composed. Only then can we figure out how we can reduce the bundle size.

A quick google search landed me on rollup-plugin-visualizer , which is a rollup plugin that generates a visual representation of the bundle.

This PR adds the visualizer plugin to the mermaid repo and generates 3 types of graphs.

Treemap & Sunburst are useful to see the space utilization. Network shows us the dependency graph. It’s a bit messy, so you might need to play around with the regex to clean some stuff out.

Opening the diagrams in new tab will give a better view.

You can see that the core build contains just the core internal components. (There are some extra dependencies added, I’m not really sure why vite included it, but it’s a very small fraction (7.8%), compared to 58.8% of unified build) 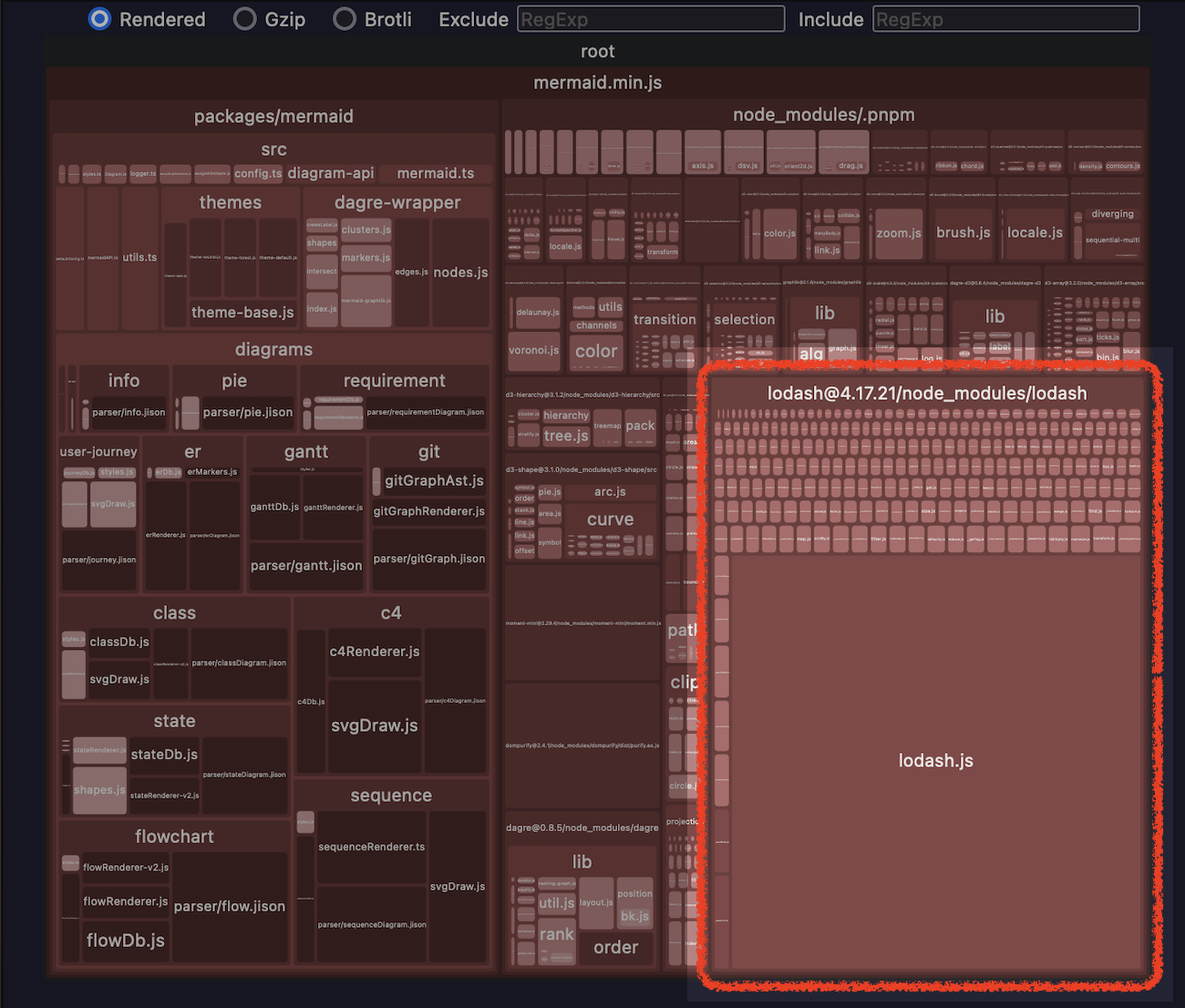 We could replace it with custom code, but it might not help much as lodash is already a sub-dependency of dagreand dagre-d3.

But is there something easier?

The tree-map tells us that it is ~28% of our bundle size. That’s huge for something that’s only used in 2 places & 3 test files.

The network graph shows that the biggest lodash mport is from mermaidAPI.ts.

And when looking at the import, it’s

Whereas everywhere else, it’s

So, let’s try changing that import.

I tried using the lodash-es package, which is a ES module version of lodash, but it didn’t help much. It actually increased the size of the bundle by 30 KiB. So let’s stick with the lodash package.

But, if we were using the old import { isEmpty } from "lodash-es"; syntax, it would have reduced the bundle size without us having to change all imports to lodash/isEmpty, etc.

As these libraries were unmaintained, Alois Klink raised this PR to replace them with dagre-d3-es , which shaved off another 216KiB from the mermaid.js bundle.

But there’s something interesting here, the core build has gone up 21% in size. Let’s dig in.

So we can see that the savings came from unused stuff in dagre-d3 being tree shaken off, but a humongous lodash-es dependency was added. lodash-es was supposed to be tree-shakeable and the solution to the problem, but it seems like it’s not. So let’s try to fix it.

Looking at the source, we see the following import.

From a blog I read earlier (don’t remember which), I knew that this was a bad practice, and that we should import the specific functions we need, instead of the whole library. Or, we should do the following to enable tree-shaking.

As it’s an external dependency, we’ll have to raise a PR in the dagre-d3-es repo. But to validate the fix, we have to

Guess which one I did? 😅 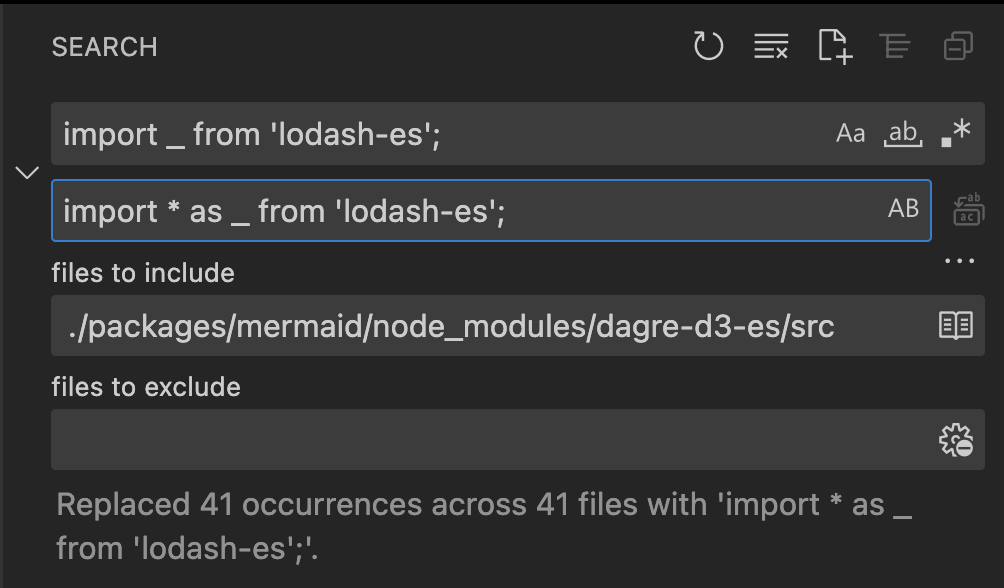 I raised a PR in the dagre-es repo, and it was merged.

Hmm… lodash and lodash-es… 🤔 Remember when I said lodash is a sub-dependency, well if you look at the packages, dagre & dagre-d3 were the ones importing lodash. Now that they’re gone, lodash is a direct, unnecessary dependency of mermaid. Let’s replace it with lodash-es, what dagre-d3-es is using. 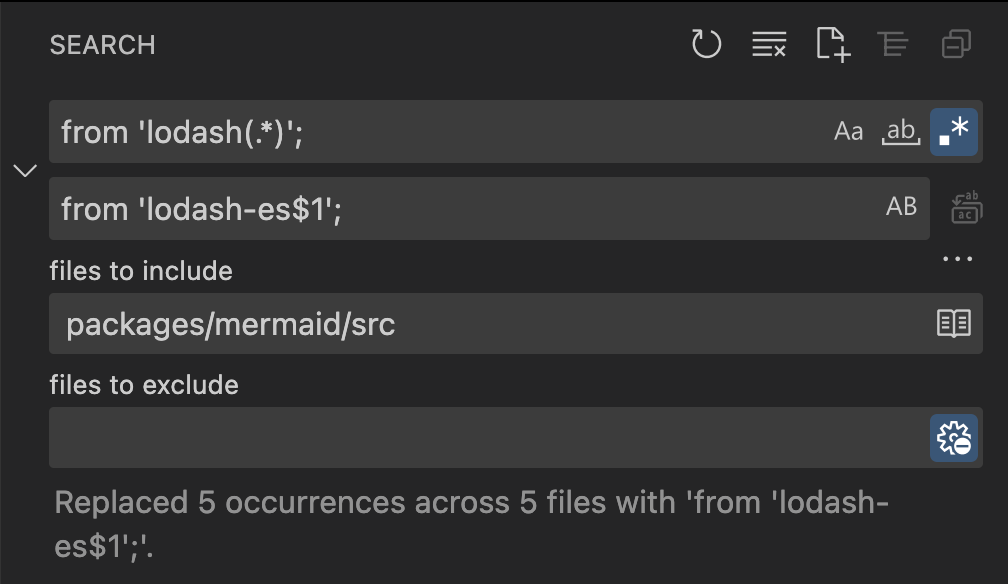 There is still 2 lodash! Ughh…

The network graph is supposed to be used to find dependencies, but I wasn’t able to find who is importing lodash. So I just randomly moved the cursor inside lodash to see if there’s any “imported by” that shows up. And there was! 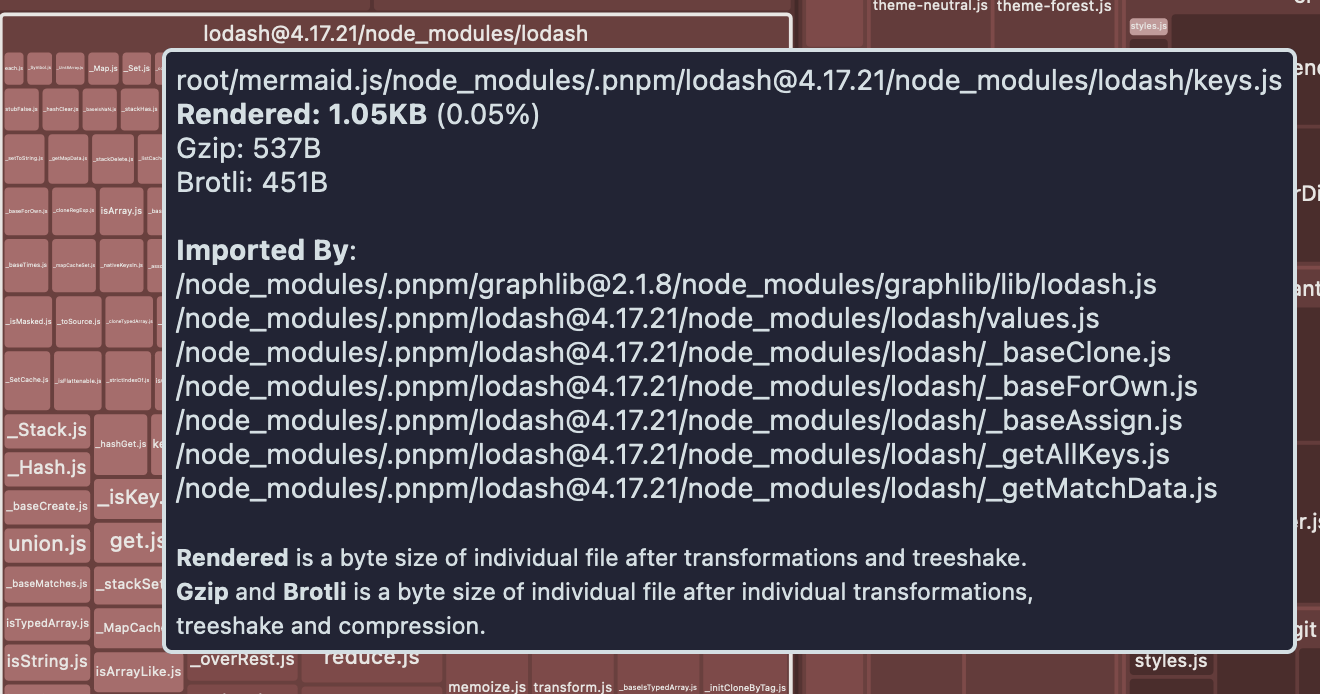 Alois did mention in a comment that dagre-d3-es has a graphlib implementation. So let’s see if we can use that.

After making the above changes, we can see that the bundle size has gone down again by 8.4% (144 KiB). core is still up 2%, not great, not terrible.

It looks like the issue we have is that vite is ignoring all of our dependencies for the mermaid.core.* builds, but it’s not ignoring the dependencies of our dependencies. This could be fixed with something like https://www.npmjs.com/package/rollup-plugin-node-externals maybe (I think rollup plugins usually work in Vite at least)

Unfortunately, this plugin wasn’t working with vite. Digging into the source, I got the regex they were using to filter stuff out. Adding it directly into the build script worked.

I’ll cover how we added lazy loading to mermaid to further reduce the bundle size in a future post.

Special thanks to Alois , Thibaut (Teebo) , Denis Bardadym and all the creators of the tools used in this post.